The Statesman Recognizes the Partnership Between Religion and Government

The Statesman Recognizes the Partnership Between Religion and Government

In the battle against the coronavirus, misunderstandings have arisen over the Church and the State. Many Governments have banned gatherings of people, including worship services. A handful of religious leaders have argued that ‘separation of Church and State’ allows the Church to operate without control from the Government. Let me caution that the concept ‘separation of Church and State’ is nowhere to be found in God’s instructions to us. It was coined by a well-meaning Government leader promising freedom of religion. Furthermore, I believe God intends for every governing official to be personally a part of both institutions: Church and State.

As we have discussed in the past, God has established three institutions that He has tasked with caring for His creation: 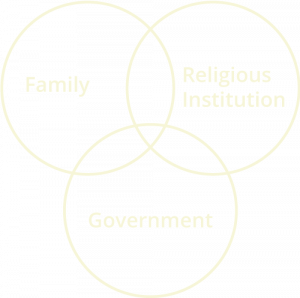 Focusing on the two in question:

Purpose: the human manifestation of the Kingdom of God on earth responsible for catalyzing man’s interaction with his Creator.

Purpose: provide an orderly society within which the individual can reach his/her full, God-given potential.

Government has responsibility for creating the environment where the individual as a physical, temporal being can experience the best possible quality of life. On the other hand, the Church focuses on the eternal aspect of the human being – the soul, including the impact of the knowledge of the eternal upon our temporal behaviour. Both are essential and must work together as the body is the house for the soul and the soul is a driving force for our body. For example, one of the strongest commands in the New Testament from the apostle Paul is:

First of all, then, I urge that entreaties and prayers, petitions and thanksgivings, be made on behalf of all men, for kings and all who are in authority, so that we may lead a tranquil and quiet life in all godliness and dignity. (1 Timothy 2:1-2)

Submit to every human authority because of the Lord, whether to the Emperor as the supreme authority or to governors as those sent out by him to punish those who do what is evil and to praise those who do what is good. For it is God’s will that you silence the ignorance of foolish people by doing good. (1 Peter 2:13-14)

Remind them to be submissive to rulers and authorities, to obey, to be ready for every good work. (Titus 3:1)

Government, in turn, may exercise authority over the Church and its believers in temporal matters. Even Jesus acknowledged this as He appeared before Pilate, the governing authority: Pilate said to Jesus “Don’t You know that I have the authority to release You and the authority to crucify You?” Jesus responded “You would have no authority over Me at all if it hadn’t been given you from above.” (John 19:10)

The instruction some are tempted to use for demanding public worship at all cost to the public is:

And let us be concerned about one another in order to promote love and good works, not staying away from our worship meetings, as some habitually do, but encouraging each other, and all the more as you see the day drawing near. (Hebrews 10:24-25)

However, this instruction is not addressing Government, but rather insincere believers for whom collective, public worship is considered of no value or not a personal priority. That is not the issue here. It is a short-term safety measure as Government fulfills its responsibility to all society, including believers.

One must be extremely careful in quoting Peter’s words to the Jewish ruling council to justify our disobedience of Government in response to closing public worship at this time:

But Peter and the apostles replied, “We must obey God rather than men”. (Acts 5:29)

This is in response to jealous religious leaders:

“Didn’t we strictly order you not to teach in this (Jesus’) name? And look, you have filled Jerusalem with your teaching and are determined to bring this man’s blood on us!” (Acts 5:28)

Here the order was from religious leaders operating in a quasi-governmental role, which they were entitled to do under the Roman administration. They ordered Peter and the Apostles not to preach Truth about Jesus Christ and God. This hearkens back to the book of Daniel, Chapters 3 and 6, where Daniel and his colleagues were ordered not to worship the God of the universe but rather a human being ‒ Nebuchadnezzar. Their obedience to God came first and they were willing to trust their God in facing the consequences.

To summarize, we have the example of men of God defying governments that were attempting to cause these men to disobey God.

A key part of the responsibility of the Church is making salvation in Jesus Christ available to every human being. We understand that the believers’ support of Government is an essential part of this (1 Timothy 2:4).

For the believer, worship is, first and foremost, a private matter, done in private. Most religious leaders have found ways to facilitate worship without jeopardizing the safety of the community.

Religious leaders must not undermine the work of Government. We in the Church must support Government in its efforts, even if we feel those efforts may be imperfect. However, it would seem disingenuous to impute impure motives, accusing the Government of using the lockdown as an excuse for obstructing the practice and spread of faith.

Rather, we in the Church need to be asking: What can we do to help meet the needs of those in our communities – spiritual and practical?

Furthermore, the Church has responsibility to fight this pandemic on another plane.

[God:] If … My people who are called by My name humble themselves, pray and seek My face, and turn from their evil ways, then I will hear from heaven, forgive their sin, and heal their land. (2 Chronicles 7:14)

Both those in Religion and Government must recognize that believers have tools at their disposal that the Government does not. We, as believers, are to support the Government through prayer and spiritual battle against that which would seek to derail the Government’s efforts to create that environment of well-being for all human beings. This requires those in both institutions using every resource our Creator has given them.